Borosilicate glass is a type of glass with silica and boron trioxide as the main glass-forming constituents. Borosilicate glasses are known for having very low coefficients of thermal expansion (≈3 × 10−6 K−1 at 20 °C), making them more resistant to thermal shock than any other common glass. Such glass is subjected to less thermal stress and can withstand temperature differentials without fracturing of about 165 °C (329 °F). It is commonly used for the construction of reagent bottles. Borosilicate glass is sold under various trade names, including Borcam, Borosil, Duran, Pyrex, Supertek, Suprax, Simax, BSA 60, BSC 51 (by NIPRO), Heatex, Endural, Schott, Refmex, Kimble, and MG (India).

Borosilicate glass was first developed by the German glassmaker Otto Schott in the late 19th century. Otto Schott was also the founder of today's Schott AG, which has sold borosilicate glass later under the brand name DURAN. As part of an equity carve-out in 2005, the DURAN Group was founded and the manufacture of Duran was transferred to it. After Corning Glass Works introduced Pyrex in 1915, the name became synonymous for borosilicate glass in the English-speaking world (though, in reality, a sizable portion of the glass produced under the Pyrex brand has also been made of soda-lime glass since the 1940s). However, borosilicate glass is the name of a glass family with various members tailored to completely different purposes. Most common today is borosilicate 3.3 glass such as Duran, International Cookware's NIPRO BSA 60, and BSC 51.

In addition to quartz, sodium carbonate, and aluminium oxide traditionally used in glassmaking, boron is used in the manufacture of borosilicate glass. The composition of low-expansion borosilicate glass, such as those laboratory glasses mentioned above, is approximately 80% silica, 13% boric oxide, 4% sodium oxide and 2–3% aluminium oxide. Though more difficult to make than traditional glass due to the high melting temperature required, it is economical to produce. Its superior durability, chemical and heat resistance finds use in chemical laboratory equipment, cookware, lighting, and in certain kinds of windows.

Borosilicate glass is created by combining and melting boric oxide, silica sand, soda ash, and alumina. Since borosilicate glass melts at a higher temperature than ordinary silicate glass, some new techniques were required for industrial production. The manufacturing process depends on the product geometry and can be differentiated between different methods like floating, tube drawing, or moulding.

The common type of borosilicate glass used for laboratory glassware has a very low thermal expansion coefficient (3.3 × 10−6 K−1), about one-third that of ordinary soda-lime glass. This reduces material stresses caused by temperature gradients, which makes borosilicate a more suitable type of glass for certain applications (see below). Fused quartzware is even better in this respect (having one-fifteenth the thermal expansion of soda-lime glass); however, the difficulty of working with fused quartz makes quartzware much more expensive, and borosilicate glass is a low-cost compromise. While more resistant to thermal shock than other types of glass, borosilicate glass can still crack or shatter when subjected to rapid or uneven temperature variations.

Among the characteristic properties of this glass family are:

Borosilicate glass is less dense (about 2.23 g/cm3) than typical soda-lime glass due to the low atomic mass of boron. Its mean specific heat capacity at constant pressure (20–100 °C) is 0.83 J/(g⋅K), roughly one fifth of water's.

The temperature differential that borosilicate glass can withstand before fracturing is about 165 °C (329 °F). This compares well with soda lime glass, which can withstand only a 37 °C (99 °F) change in temperature and is why typical kitchenware made from traditional soda-lime glass will shatter if a vessel containing boiling water is placed on ice, but Pyrex or other borosilicate laboratory glass will not.[1]

For the purposes of classification, borosilicate glass can be roughly arranged in the following groups, according to their oxide composition (in mass fractions). Characteristic of borosilicate glasses is the presence of substantial amounts of silica (SiO2) and boric oxide (B2O3, >8%) as glass network formers. The amount of boric oxide affects the glass properties in a particular way. Apart from the highly resistant varieties (B2O3 up to a maximum of 13%), there are others that – due to the different way in which the boric oxide is incorporated into the structural network – have only low chemical resistance (B2O3 content over 15%). Hence we differentiate between the following subtypes.

The B2O3 content for borosilicate glass is typically 12–13% and the SiO2 content over 80%. High chemical durability and low thermal expansion (3.3 × 10−6 K−1) – the lowest of all commercial glasses for large-scale technical applications – make this a multitalented glass material. High-grade borosilicate flat glasses are used in a wide variety of industries, mainly for technical applications that require either good thermal resistance, excellent chemical durability, or high light transmission in combination with a pristine surface quality. Other typical applications for different forms of borosilicate glass include glass tubing, glass piping, glass containers, etc. especially for the chemical industry.

Borosilicate glass has a wide variety of uses ranging from cookware to lab equipment, as well as a component of high-quality products such as implantable medical devices and devices used in space exploration 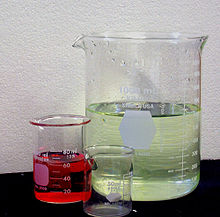 Virtually all modern laboratory glassware is made of borosilicate glass. It is widely used in this application due to its chemical and thermal resistance and good optical clarity, but the glass can react with sodium hydride upon heating to produce sodium borohydride, a common laboratory reducing agent. Fused quartz is also found in some laboratory equipment when its higher melting point and transmission of UV are required (e.g. for tube furnace liners and UV cuvettes), but the cost and difficulty of working with quartz make it excessive for the majority of laboratory equipment.

Additionally, borosilicate tubing is used as the feedstock for the production of parenteral drug packaging, such as vials and pre-filled syringes, as well as ampoules and dental cartridges. The chemical resistance of borosilicate glass minimizes the migration of sodium ions from the glass matrix, thus making it well suited for injectable-drug applications. This type of glass is typically referred to as USP / EP JP Type I.

During the mid-20th century, borosilicate glass tubing was used to pipe coolants (often distilled water) through high-power vacuum-tube–based electronic equipment, such as commercial broadcast transmitters. It was also used for the envelope material for glass transmitting tubes which operated at high temperatures.

Borosilicate glasses also have an application in the semiconductor industry in the development of microelectromechanical systems (MEMS), as part of stacks of etched silicon wafers bonded to the etched borosilicate glass. 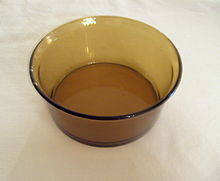 Many high-quality flashlights use borosilicate glass for the lens. This increases light transmittance through the lens compared to plastics and lower-quality glass.

Several types of high-intensity discharge (HID) lamps, such as mercury-vapor and metal-halide lamps, use borosilicate glass as the outer envelope material.

New lampworking techniques led to artistic applications such as contemporary glass marbles. The modern studio glass movement has responded to color. Borosilicate is commonly used in the glassblowing form of lampworking and the artists create a range of products such as jewelry, kitchenware, sculpture, as well as for artistic glass smoking pipes.

Lighting manufacturers use borosilicate glass in their refractors.

Organic light-emitting diode (for display and lighting purposes) also uses borosilicate glass (BK7). The thicknesses of the BK7 glass substrates are usually less than 1 millimeter for the OLED fabrication. Due to its optical and mechanical characteristics in relation with cost, BK7 is a common substrate in OLEDs. However, depending on the application, soda-lime glass substrates of similar thicknesses are also used in OLED fabrication.

The Hale Telescope's 200 inch mirror is made of borosilicate glass.

The optical glass most often used for making instrument lenses is Schott BK-7 (or the equivalent from other makers), a very finely made borosilicate crown glass.[10] It is also designated as 517642 glass after its 1.517 refractive index and 64.2 Abbe number. Other less costly borosilicate glasses, such as Schott B270 or the equivalent, are used to make "crown-glass" eyeglass lenses. Ordinary lower-cost borosilicate glass, like that used to make kitchenware and even reflecting telescope mirrors, cannot be used for high-quality lenses because of the striations and inclusions common to lower grades of this type of glass. The maximal working temperature is 268 °C (514 °F). While it transitions to a liquid starting at 288 °C (550 °F) (just before it turns red-hot), it is not workable until it reaches over 538 °C (1,000 °F). That means that in order to industrially produce this glass, oxygen/fuel torches must be used. Glassblowers borrowed technology and techniques from welders.

Borosilicate glass has become the material of choice for fused deposition modeling (FDM), or fused filament fabrication (FFF), build plates. Its low coefficient of expansion makes borosilicate glass, when used in combination with resistance-heating plates and pads, an ideal material for the heated build platform onto which plastic materials are extruded one layer at a time. The initial layer of build must be placed onto a substantially flat, heated surface to minimize shrinkage of some build materials (ABS, polycarbonate, polyamide, etc.) due to cooling after deposition. The build plate will cycle from room temperature to between 100 °C and 130 °C for each prototype that is built. The temperature, along with various coatings (Kapton tape, painter tape, hair spray, glue stick, ABS+acetone slurry, etc.), ensure that the first layer may be adhered to and remain adhered to the plate, without warping, as the first and subsequent layers cool following extrusion. Subsequently, following the build, the heating elements and plate are allowed to cool. The resulting residual stress formed when the plastic contracts as it cools, while the glass remains relatively dimensionally unchanged due to the low coefficient of thermal expansion, provides a convenient aid in removing the otherwise mechanically bonded plastic from the build plate. In some cases the parts self-separate as the developed stresses overcome the adhesive bond of the build material to the coating material and underlying plate.

Aquarium heaters are sometimes made of borosilicate glass. Due to its high heat resistance, it can tolerate the significant temperature difference between the water and the nichrome heating element.

Specialty glass smoking pipes for cannabis and tobacco can be made from borosilicate glass. The high heat resistance makes the pipes more durable. Some harm reduction organizations also give out borosilicate pipes intended for smoking crack cocaine, as the heat resistance prevents the glass from cracking, causing cuts and burns that can spread hepatitis C.

Most premanufactured glass guitar slides are made of borosilicate glass.

Borosilicate is also a material of choice for evacuated-tube solar thermal technology because of its high strength and heat resistance.[citation needed]

The thermal insulation tiles on the Space Shuttle were coated with a borosilicate glass.[12]

Borosilicate glasses are used for immobilisation and disposal of radioactive wastes. In most countries high-level radioactive waste has been incorporated into alkali borosilicate or phosphate vitreous waste forms for many years; vitrification is an established technology.[13] Vitrification is a particularly attractive immobilization route because of the high chemical durability of the vitrified glass product. This characteristic has been exploited by the industry for centuries.The chemical resistance of glass can allow it to remain in a corrosive environment for many thousands or even millions of years.

Borosilicate glass tubing is used in specialty TIG welding torch nozzles in place of standard alumina nozzles. This allows a clear view of the arc in situations where visibility is limited.

COLORS GLASS  is a professional manufacturer  specialized in researching, designing , manufacturing and marketing all kinds of glass products . With three thousands of molds, strong technical force, advanced equipments from Germany and Italy we can produce 12 series of glass articles in hundreds of types, such as glass wine bottles, champagne bottles  ......[ read more>>]